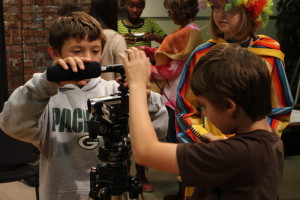 KIDS-4 endeavors to promote media literacy by putting kids in control, producing television for kids, by kids. The children of KIDS-4 take on a very adult role as they produce, write, direct, edit and star in their own television productions.

The hands-on aspect of KIDS-4 is coupled with media literacy curriculum in the form of hand-outs, short videos, and discussion about different aspects of media. The kids focus on topics like television news, commercials and paid programming, and reality and make-believe on television shows.

As children watch more and more television every day, it makes sense that they should learn to decipher the powerful medium just as they learn to read or write. With a mastery of television production and its goals, children become informed consumers of the television medium.

For more information on media literacy, visit the site below: