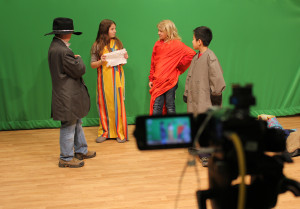 KIDS-4 is the name of an after-school program run by Sun Prairie Media Center. The program consists of about 50 to 70 children per year divided into groups of six to ten. The groups meet once a week for an hour to design, create, and produce their own programs.

Though each crew of kids is assigned an adult crew leader and a high school-aged crew assistant, the work they do is entirely their own. The kids in KIDS-4 write, record, produce, direct, and edit their own programs. Using this hands-on approach KIDS-4 hopes to teach children about the power of the television medium.

KIDS-4 also promotes volunteerism in the Sun Prairie community, working with the kids in KIDS-4 to record events around the community. KIDS-4 empowers the children of Sun Prairie, giving them a voice in Sun Prairie.